Words! I made with the words, I packaged them into a (mostly) tidy file, and I shipped them to the intended destination.

Well, not really. I still need to clean up my draft in places, do a bit of verbal housekeeping, slay some adverbs. (For some reason, I get rather adverb-y when I tone down the inner critic. I have to let myself do it, counting on future Jon to fix it later, or else I get bogged down in the little details of getting this one sentence just right.

I think this is the part where I am supposed to say how it feels.

Let me tell you, it feels just about the same as any other day. The only real change is that I have a little less pressure, and that’s nice, anyway.

I am proud of myself for getting it done, sure, but mostly I am tired.

But hey, no time to be tired! NaNoWriMo is juuuuust around the corner, boys and girls!

I am at least going to start NaNo this year. I do not know if I will keep up the word count, though I am fairly confident I can, but since I have written every day for the last… let me check… 144 days, I’m not going to let some pathetic November, even if it is one of my personal busiest months of the year, come along and screw that up. (Seriously, though, people… November is a terrible time for NaNoWriMo.)

Part of the reason I want to do the NaNo thing is I am going to take a stab at more of the directionless, pantsing, discovery writer sort of deal, where I have a general, fuzzy idea of where I’d like to go but no plans for which path to take to get there.

The story idea I have is kind of exciting, in that I-really-want-to-goof-off kind of way, so I’m looking forward to it. The book I just finished is a contemporary time travel story, and now for something… completely different. Old people in a fantasy realm adventuring just a little past their prime!

I do not know what my ending is yet, and that is critical — I need to know where I’m going, even if I’m not sure how to get there. I discovered that with this last book. That won’t stop me from beginning tomorrow to lay the foundation for what promises to be a rather fun excursion into Storyland.

(I promise, nothing related to the story is called ‘Storyland.’)

(And there are no talking cats.)

I’m going to also experiment with a split workload this month: making new words in the morning on one story, editing a second story in the afternoon. I think with the dedicated timeslots, I might be able to train my brain to produce when I need it to do so.

Faithful reader, you will be the tenth to know how that goes.

No, I do not suspect I shall grow weary of that joke anytime in the near future.

That may never end, but my book has.

That is correct, people: I am proud to announce that I have completed a first draft of my novel!

Granted, I wrote the first half of this book two or three times but I always bounced off of that flabby middle. This time, I broke through it and out of sheer force of stubborn, ground my way to the ending.

It’s not what I would call a ‘glorious’ feeling (though my celebration cheesecake was certainly fantastic), but it does feel, well, good.

I find myself almost in a smug state, a proverbial tight lipped smile and shake of the head at all those who told me I could never finish this novel.

To clarify, “all those” would be me. Just me, quite insistent that this is never going to happen. Everyone else in my life has been supportive, in their own ways, but I remained resolute in my belief that this was impossible for me.

Well, TAKE THAT, PAST JON.

In a lot of ways, my ending sucks, but it sucks in a manner I predicted and I am fairly certain I can fix with a lot of massaging and maybe some reconstructive surgery. A bit of the emotional buildup fell flat, but I needed to let it fall flat so that I did not dwell on it instead of finishing.

This is the first novel-length work I have finished. The other book I wrote, which is a project that will take years before it can see the light of day, wrapped initially at around 35,000 words. No small feat, writing that, but it was incomplete, short, and I knew it was going nowhere for a while.

My current draft is different, because it IS going somewhere, and soon. I already have at least one place to which I know I will submit it, and plan to research more.

That smug feeling is mixed with apprehension. My wife pointed out to me that this feels different, too, because it was not ‘written just for me,’ or whatever it is they say. This was written because I like the story, sure, but also because I wouldn’t mind being paid for it.

Edits are forthcoming for the beginning part — the section that is, at the moment, the most polished — but I am considering setting it aside after that for the month of November.

NaNoWriMo is coming up and I think, just maybe, I can win it for the first time.

The main reason is that I have been writing consistently, every day, for over four months now. I have never done that prior to now and since I’m writing every day, why not just write that little bit more and crank out yon 50,000 words next month?

Plus, I’m at just the right spot to open a new project, having wrapped this draft. It will be refreshing, I think, to get out of that headspace for a little while and see what new story frontiers I might explore.

Now I just have to pick an idea and start planning…

Sorry folks, I’m sort of phoning this one in. I know, it’s a chump move.

My NaNoWriMo efforts have been choppy at best, so far. I wrote a couple hundred words before today. I did some great planning, but actual word-creation was just not happening. 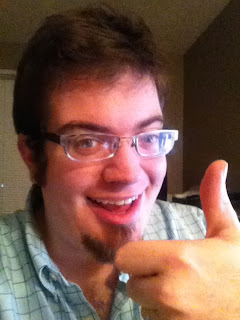 And you know what? These things only matter as much as I allow them to matter.

So today I have finally made some decent progress in my project. I made it past the first scene, which was just tough to write, and the story is starting to move. Now I’m clocking in at a little over 2000 words.

So, instead of spending a bunch of time on a blog post, I’m going to keep working on catching up on NaNo. I pray the Bloggods will forgive me, as will you, dear reader.

Thanks in advance for the clemency I’m sure (read: hoping) you have extended!