On October 31st, my self-initiated project draws to a close. Around 80 days ago, I decided that I am tired of existing in the gonna-do-it-someday realm of wanna-be writers. It occurred to me that the only way anything would happen with my writing is if I actually began.

I know, I know, this seems like a ridiculously simple realization. While I understood this logically before, it really hit home just how much I wanted to write, and how silly it was to hold myself back.

In preparation for NaNoWriMo, I began my own version of the contest, in which I planned to write my first novel in the months leading up to November. By my plan, I would write 700 words a day, to help prepare me for the rigorous word count demands brought by NaNoWriMo.

I dubbed this project “StoffelNoWriMos”, and waded hip deep into writing a novel, charging forward into the murky abyss, trudging ever forward, ever upward.

I’m happy to report that I have emerged triumphant.

From the abyss, I strode (or stumbled), and descended the mountain, carrying with me the tablets (with embedded flash memory and USB support) inscribed with the delicate carvings, a testament to the creative breath issued forth from the god of the story set before me.

My wife was quick to cover my glowing face with a cloth. My best friend urged her to replace it with a paper bag.

A beautiful novel had come forth, and all bowed in reverence.

Okay, okay, it may not have been quite that dramatic. (Imagery inspired by “The Writer’s Prayer”, found in Confessions of a Freelance Penmonkey, by Chuck Wendig)

But hey, it’s pretty cool, having a first draft.

Technically speaking, I did not keep up with my numeric goals.

I still feel like a winner. I had skirted around this story for years, always thinking about when I was going to do it, in the nebulous ‘later’. Now, though, it exists. It has tangible substance somewhere outside of my brain.

My confidence goes through various states of matter (solid, liquid, gas, and plasma are actually rather fitting metaphors for my typical confidence levels). Having a (mostly) finished draft did not fill me with ultimate glee, but I sure feel better about my ability to complete a project.

If one were to draw a tidbit of useful advice from this experience, it should probably be:

Projects started and abandoned are anchors to confidence, and for this metaphor to work, your confidence needs to fly free.

In the meantime, I also managed to write a short story (not my typical form) and begin to prepare for NaNoWriMo.

If you add all of this together, it’s pretty significant, at least to me.

Three months ago, I was a restless, grumbling slacker who sometimes felt pointless.

Now, though, I have undergone a veritable metamorphosis, dear reader.

Today, I am a restless, grumbling slacker who sometimes felt pointless, and IS ALSO WRITING.

A subtle difference, some may say, but a great one.

If I had abandoned this after a few thousand words, I probably would have abandoned this whole writing idea. (I almost put in “That’s all she wrote,” but that just does not play well here.) My shaky confidence could not have survived such a blow.

Now, though, I find myself excited about the future. I get giddy thinking about the fun ways to twist the emotions of reader and characters alike, new possibilities for what I will write, instead of what I might eventually do.

Back from the heady rush of glee, I understand this is just a first draft. There’s still so much work to be done before my novel is ready to be distributed. And, you know what? I’m okay with that.

Each day is its own struggle to continue the momentum that I’ve gained, but I now at least feel like it’s possible to succeed.

Let’s see if I can take that feeling into November! (Spoiler alert: I can.)

I have a confession to make, people: Technically speaking, I’m new to this writing gig.

All told, I’ve been wholly committed to being a writer for a couple of months. I know, I know, it doesn’t seem like much at all.
Still, I’ve been writing for a lot longer than that. In that time, I’ve found one hyper-critical tidbit of process that has saved my flow in many occasions.
If you do not know what to write regarding a relatively small detail, do not stop writing.
Instead, throw a bracket-blank into your text, and go on your merry way.
It’s simple. Say Bob and Lauren are in Kiev, and need to get directions to the candy store they’ve located on their map. You could stop writing, pull up an Internet browser, and get lost for a few minutes (or a few hours) looking for just the right phrase (Покажіть мені це місце на мапі).
When you find it, or give up, you wander back to your draft, distracted, unfocused, and thoroughly off track. Not the best state of mind for writing.
Alternatively, you could leave yourself a small note, reminding you to fill it in later.
When I do it, it looks something like this:
/———\
Bob tapped the hobo’s shoulder, while Lauren fiddled with the Ukrainian-to-English phrasebook.
The hobo turned to them, a devilish grin on his face. Lauren’s breath caught, but she managed to read from the book, “[DIRECT ME TO DELIGHTFUL CONFECTIONS, FOOLISH MORTAL!].”
\———/
By so doing, we have successfully jumped right over the troublesome pothole, and may now zoom ahead. We will see just how much this mysterious hobo knows about the black market candy store, and, further, about Lauren’s secret past.
This method is useful for situations other than language barriers. You could try applying a thin layer of bracket-blank to:
Umm…
Maintaining consistent flow is of utmost importance to me when I’m writing. Otherwise, I’ll hardly accomplish anything in my writing sessions.
Remember: the most important thing, when working on a first draft, is to get something down. You can always go back and fix it. Bracket-blanking helps free you to do this.
I hope this helps you writerly types out there. With demanding word-count expectations coming up during NaNoWriMo, we can’t afford to get hung up on minute details. Allow yourself to go back and fix it later, even if it’s at the end of the day. You’ll be happy you did.
Keep the writer juices flowing.

Today, we worked to take a picture to accompany my post on WriMos FTW! (Did I mention that’s up? Feel free to take a look!)

I’m all in all satisfied with the result, and… intrigued by the other photos that resulted. 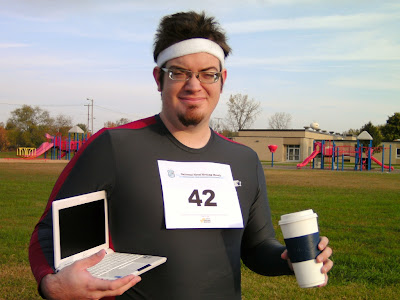 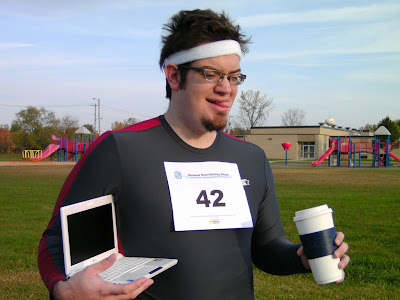 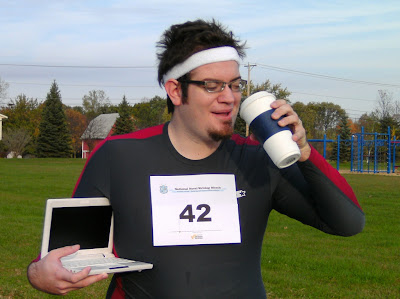 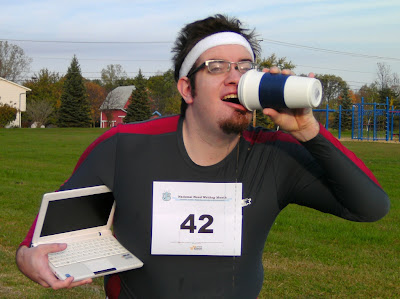 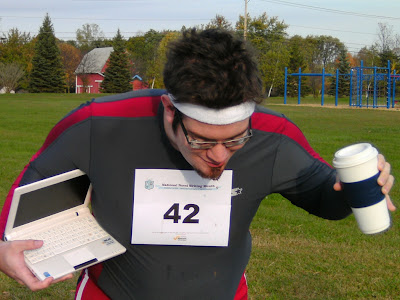 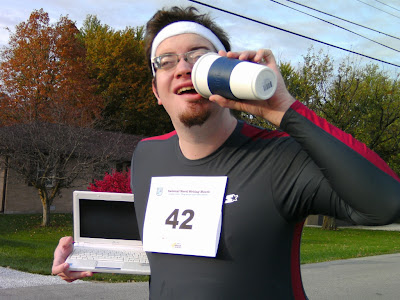 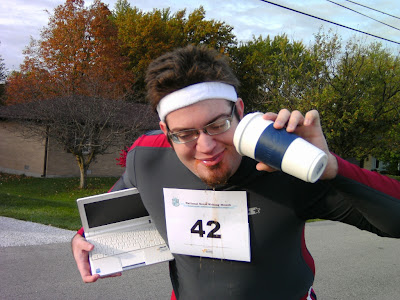 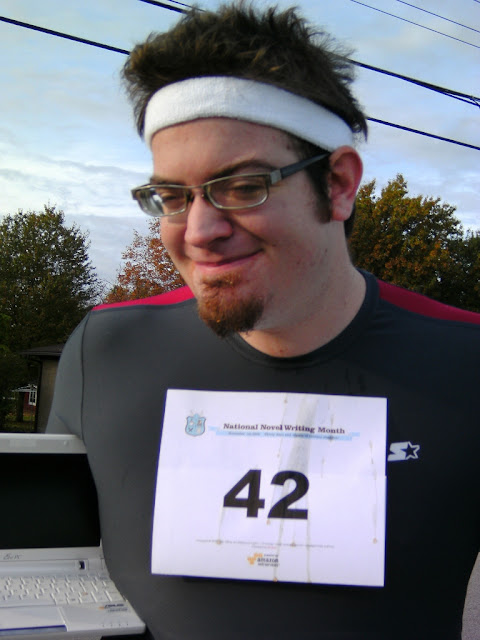